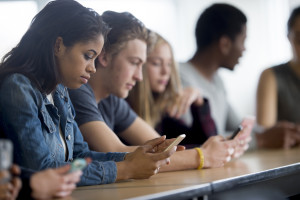 We’ve all seen it: A group of teenagers sitting together, perhaps at a restaurant or the mall, but all of them glued to their phones, barely interacting with the friends right next to them. As common as this sight has become, it still gives us pause. What, you may wonder, is this doing to our kids?

In September’s Educational Leadership, McREL’s Bryan Goodwin takes a look at the effects of our “plugged in” culture on students and their teachers. One clear effect, he finds, is how students relate to others: One analysis of more than 70 student surveys, for example, found that empathy among college students is at its lowest level since 1979—a whopping 40 percent lower.

Not surprisingly, researchers and educators alike have noted a loss in the ability of students to have deep, empathic conversations. In an article for The Atlantic, one such teacher in Kentucky described how, in a classroom interview activity, most of his high school students were unable to move beyond the scripted questions and engage in more spontaneous, authentic dialogue. His solution? He asked his students to record their conversations on their smartphones, watch them later, and self-assess their conversation skills.

Teachers need to keep in mind, too, the importance of modeling empathy. Goodwin notes a recent Stanford study, in which middle school math teachers who engaged in an exercise on the importance of empathy cut in half the percentage of student suspensions over the school year (from 9.6% to 4.8%).

Today more than ever, teachers need to show and model empathy and provide opportunities for students to make real human connections, Goodwin concludes. While we can’t expect kids to give up their phones altogether, we can help them balance their “high tech” lives with “high touch” learning environments.