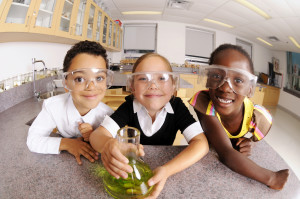 So often we hear parents talk about their children digging in the dirt, chasing butterflies during baseball games, and climbing trees. Or that their children are experimenting in the kitchen by mixing salt, water, and corn syrup…just to see what happens. Children are natural scientists, enthusiastic and motivated to discover more about the world around them.

Research suggests that the majority of adult scientists developed their interest in the field prior to middle school (Maltese & Tai, 2010) suggesting that early exposure to science at the middle and younger grades is important to attract students into science and engineering (Tai, Liu, Maltese, & Fan, 2007). Yet many children do not receive adequate science instruction in the early grades. At a time when educators could turn children’s curiosity into a lifelong passion for science, instruction is often narrowly focused on mathematics and reading.

In 2009, only one-third of U.S. fourth graders scored proficient or above in science on the National Assessment of Educational Progress. Inadequate exposure to science content among students, low levels of student motivation toward science, and poor teacher preparation and self-efficacy in science may lead to this marginal science achievement. Students who do not learn science during the elementary years are likely to have poor science understanding through adulthood.

While we recognize the need for scientifically literate citizens, the time and demand for good elementary science teaching often does not get the same attention as mathematics and literacy. We might not realize that both mathematics and literacy are integral to learning science and can therefore be naturally woven into a science lesson. For example, a student who digs in the dirt might be asked to examine how many different species of life can be found in a 2 meter square area. With that science content, the student can create a graph, write about the results, or read about the insects found.

Why don’t we capitalize on this opportunity to provide exciting and meaningful science experiences for our young children?  What challenges or barriers do you face in teaching science?