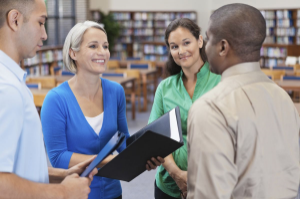 Frustratingly for practitioners, research often tell us what a phenomenon is, but not why it came to be that way. And that can strand us without an answer to the most important question: How should we manipulate inputs to achieve the outputs we desire?

So it is with school culture. In his column for the March edition of ASCD’s Educational Leadership magazine, McREL CEO Bryan Goodwin recounts how a conversation with a principal caused him to reexamine his long-held stance that school culture is the “secret sauce” of high-performing schools. The problem for that principal, Bryan writes, was the difficulty of teasing apart correlation from causation. Does a strong, healthy school culture cause high performance? Or might it be the other way around?

Even if we can’t know for sure, there are things we can do that are likely to bring about both a positive school culture and great academic performance, Goodwin writes. Citing McREL research, he identifies five phases of development that high-performing schools tend to pass through en route to excellence. They show how actions and attitudes, particularly when it comes to collaborative effort, can influence results.