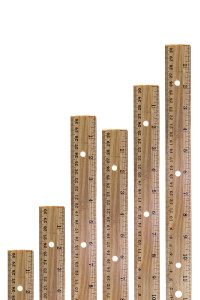 Raise the bar and raise performance. For 20 years, that principle has guided school reform efforts in the United States and abroad. Since the early 90s, every U.S. state has developed systems standards, student testing on those standards, and accountability for results on those tests. More recently, 46 states have signed on to Common Core standards, which promise to raise the bar even higher.

A new report from Harvard University, however, may cast some doubt on whether tougher state standards actually raise student performance.

The study analyzed third-party ratings for state standards—and in particular, changes in those ratings—with changes in statewide student achievement data from 1994–2011.

One problem with this kind of analysis is that the two organizations that rate standards (Fordham Foundation and the American Federation of Teachers) don’t agree on much, including how they rate state standards. For example, AFT’s ratings appear to suggest that nationwide, mathematics standards rose in quality in the 90s, peaked around 2001, and then declined. Fordham’s ratings, on the other hand, suggest that mathematics standards nationwide flat-lined until about 2006, when they sharply improved.

Nonetheless, Harvard researchers found that irrespective of the ratings systems they used, no correlation existed between changes in ratings and student performance—even when allowing a three-year lag for better standards to translate into better learning.

The researchers offered two conclusions for the generally weak link between standards and achievement. First, it’s possible the ratings themselves are not terribly accurate measures of the quality or rigor of standards (after all, the two organizations can’t seem to agree on what good standards look like).

A second explanation, though, is that more rigorous standards don’t necessarily “translate into the pedagogical changes necessary to inﬂuence student achievement” (p. 7). In other words, simply because states adopt new standards, curriculum and textbooks don’t necessarily change, nor do teaching techniques.

One important bright spot did emerge in the analysis, though. When low-scoring states improved their standards, low-income, minority eighth graders in those states demonstrated higher levels of performance. So perhaps the better standards served as something of a “shock treatment,” raising if not the ceiling, at least the floor on student performance. That is, of course, a laudable outcome.

Yet it remains an open question whether standards have raised the performance of all students across the board, including top performers. As I’ll explore in my next blog, when we dig deeper into international comparisons of student performance data, an alarming picture emerges of how well America’s top-performing students stack up to their counterparts abroad.

How effective have standards been at raising expectations and student outcomes in your district, school, or classroom?