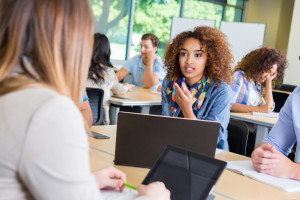 Critical thinking has always been key to academic and career success. But in the information age, it’s more important than ever, as students struggle to keep up with and process the copious amounts of information coming at them constantly.

In the latest Research Matters column in Educational Leadership, McREL President and CEO Bryan Goodwin looks at what critical thinking really is and how it can best be taught. Its complexity—a mixture of dispositions and skills including valuing inquisitiveness and other points of view, using logical reasoning to support arguments, and examining our own beliefs and changing them based on new data—may explain why schools, and even colleges, often do little to develop it.

However, Goodwin says, research shows it can be learned, using two key approaches. First, critical thinking skills should be taught directly. Marin and Halpern (2011) showed that students in low-performing high schools who received explicit instruction in such skills (how to develop arguments, parse correlation from causation, identify stereotypes and mental models, and predict long-term consequences of decisions) demonstrated significant gains in critical thinking, while students who took a course in which critical thinking skills were embedded but not taught directly showed no gains. Second, critical thinking should be explicit but not taught in a vacuum. Abrami et al. (2015) found three elements needed to be in place: classroom dialogue and discussion; complex problem solving; and mentoring.

Goodwin concludes that perhaps the best approach, then, is to help students develop critical thinking skills through explicit instruction that is interwoven into course content, not as a standalone endeavor. This approach, combined with simple strategies such as asking students to support every answer they give with the word because, may be the best deterrent to fake news we can offer.