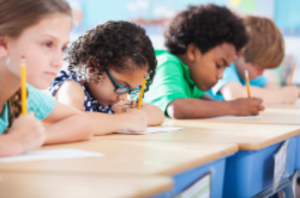 In his latest Research Says column for Educational Leadership, McREL President and CEO Bryan Goodwin sheds light on the psychological phenomenon known as “stereotype threat,” its effects on learning, and how schools can help their students overcome it.

Stereotype threat, he explains, refers to situations in which people feel at risk of confirming negative stereotypes about their race, gender, or social group. In the classroom, especially as students get older and begin internalizing negative messages about stereotypes and developing their personal identities, this subtle but powerful phenomenon has a tangible effect on achievement. Researchers at Princeton, for example, found that minority children who were asked to report their ethnicity prior to a test got 21 percent fewer correct answers than those who were asked to report their ethnicity after the test.

However, Goodwin writes, research has also shown that rather simple interventions can reverse these effects. In one study, both black and white 7th grade students were asked to spend 15 minutes writing about the role of personal values in their lives at the beginning of the term in a targeted course. During the term, this simple exercise cut in half the number of students earning a D or lower, reduced achievement gaps by 40 percent, and reversed previous declines in performance.

Goodwin concludes that, while promising, interventions must also be accompanied by high-quality instruction and a challenging curriculum, and they must be carried out in a way that doesn’t further stigmatize students.