What skills do students really need to compete in a global economy? 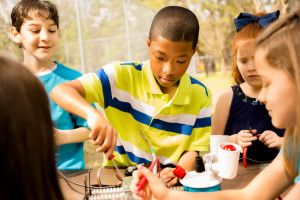 The alarm bell has been sounding for a while now about a shortage of skilled STEM workers in the U.S., with business leaders often calling on schools to do a better job of preparing students for a hypercompetitive global economy. As a result, we’ve seen a dramatic, nationwide rise in STEM initiatives—from large federal programs like Educate to Innovate to your local elementary school’s afterschool robotics program.

Others, however, say there is no evidence of such a shortage and that other factors are at play, such as businesses not being willing to pay higher wages that would attract more skilled workers. Some critics have even suggested that focusing too much on math, particularly algebra, is taking away from other, more critical skills students need to be learning.

So what’s an educator to do? In the December 2016/January 2017 issue of Educational Leadership, McREL’s Bryan Goodwin and Heather Hein try to get some answers by taking a look at what the research says about the skills gap and how to best fill it.

There is evidence, for example, that the skills employers across multiple industries are most looking for are critical thinking, problem solving, collaboration, and communication. The skill they’re least interested in? Applied math. Other studies show that the bigger issue may be the way math is taught: A 2004 study, for example, shows that American teachers often downgrade complex, heuristic-type problems into simplistic, formulaic ones that don’t engage students in real problem solving. Another, more recent study seems to bear this out—college students identified as needing remedial mathematics actually performed better when they were placed in more challenging statistics courses, which researchers say were more practical and engaging.

To succeed in a global world, the authors conclude, students need both hard and soft skills, basic and applied knowledge, and, perhaps most important, not just computational skills but the creative thinking needing to solve real problems.