Is it “struggle” or is it “effort?”—Maybe it’s a cultural thing 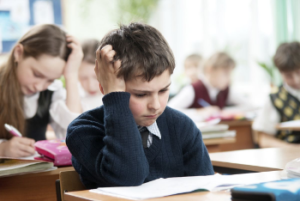 Do American students view struggling in areas such as mathematics and science to be synonymous with failure? Research on American and Asian students suggests so. In a study published in Child Development, Li et al. (2014) found that American students are more likely to believe that struggling in school is a sign of cognitive deficiency. Inversely, a study from Stigler and Hiebert (1998) published in American Educator showed that Asian students tend to view struggle as a normal part of gaining academic proficiency, believing that skill in a subject area only comes after extensive practice.

Investigations into the cultural differences between American and Asian parents’ interactions with their children about school might hold some clues as to why such differences may exist. A National Public Radio story described Brown University professor Jin Li’s findings that parents of Taiwanese children were more likely to praise the effort and practice put forward by their children in school. American parents, on the other hand, complimented their children on their ability and talent more frequently. Li suggests that American students’ beliefs about innate proficiency are reinforced by parents and educators, whereas the Taiwanese families place more value and focus on practice and dedication.

These beliefs also play out in American school work groups, where students are clustered with peers of similar abilities in areas such as language and math. Poole (2008) found that, while these practices demotivate students and stifle learning, they also send a message that students fall into categories of natural ability.

In a recent project, McREL researchers found that, generally, American students don’t believe that feeling challenged in the classroom is related to feeling successful in school. It’s no surprise, then, that among American students, challenging subjects such as mathematics cause anxiety, fear, and general discomfort—emotional distress that stems from believing that skill in math is an inborn trait rather than being something that develops from repeated practice and dedication, as Furner and Duffy (2002) found in their research.

Indeed, if we subscribe to the notion that success in a given subject requires a natural ability, we are less likely to prevail through the struggle that comes with learning any new skill. In his book Math Anxiety Reduction (1992), Robert Hackworth suggests that such feelings and misconceptions can be addressed by having students focus on the gradual steps that build mathematics proficiency, rather than immediate success. In addition, teachers can also help students evaluate their own progress along the way, rather than doling out summative grades. In this way, students connect with and focus more on the developmental process of learning, instead of on simply being evaluated.

It does seem that American students have a harder time processing and dealing with the struggle involved in gaining proficiency in some academic areas, such as mathematics. To fully understand where these beliefs come from, an examination of our own cultural biases as educators and parents might be in order. We should be asking the question, “Do we lead children to believe that struggling in school equates to failure?”

As a research specialist in McREL’s Center for Educator Effectiveness, Dr. Joshua Stewart specializes in psychometrics and pedagogically focused research. He has worked on the development of teacher evaluation systems, in particular, in examining item functionality and reliability using item response theory. He has also worked on cross-cultural projects in Pretoria, South Africa, for a K–12 HIV awareness program, and in Karlsruhe, Germany, where he examined prospective teachers’ views on evolutionary biology education, comparing them to views held by prospective teachers in the United States.