Do our students care about higher standards? 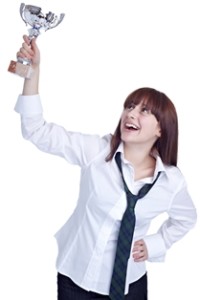 A recent working paper from the National Bureau of Economic Research, co-authored by Steven Levitt (of Freakonomics) reports on a series of studies involving some 7,000 students in the Chicago area to see whether incentives—such as cold, hard cash—could entice students to perform better on tests.

Researchers told students immediately prior to taking a standardized test (such as those used to evaluate school performance) that if they did well on these tests, they would receive an award. Over the course of the experiments, the researchers tweaked the conditions, for example, changing the dollar amounts (from $10 to $20), changing the rewards (from trophies to cash), and altering the payout schedule from immediately after the test to 30 days later. In some cases, they provided students with the cash or trophy prior to the test and told them they would keep it if they did well or return it if they did poorly.

In general, the bribes worked: students who received awards performed at significantly higher levels (about 5–6 months more of learning) on the tests than those who did not (see p. 14 of the report).

Other intriguing nuances emerged as well. For example, non-monetary rewards, such as trophies, worked for younger students, but not older ones. Delaying payments consistently diminished the benefits of the rewards. And students were far more motivated by the threat of loss—getting a reward in advance which could be taken away for poor performance—than anticipation of a future reward.

Perhaps the most interesting finding of these studies, however, comes as a single sentence tucked into page four of the report:

Our results suggest that in the absence of immediate incentives, many students put forth low effort on the standardized tests that we study.

In other words, what the study may really have found is that most students were capable of doing much better on tests if they only applied themselves a bit more during the exam. Recall that the rewards were only announced immediately prior to the tests, so students in the experiment weren’t preparing any more for the tests than students in the control groups; they were simply buckling down a bit more to receive a small $10 prize or $3 trophy. These are also the same tests that have high stakes for teachers and administrators, but as the researchers put it, “low stakes for the students choosing to exert effort on the test.”

With this in mind, have we spent the past 20 years fretting over raising standards, creating related assessments, and designing accountability systems to improve student performance, but neglecting to help students understand why any of this should be meaningful to them? Moreover, are we about to make this same mistake all over again with Common Core State Standards?

In my next blog, I’ll explore what it might look like if we were to put student motivation (and an answer to the question, what’s in it for them?) at the center of our reform efforts.

Have standards-based reforms neglected student motivation… or maybe even undermined it?