Are your school improvement efforts stuck? Try an inside-out approach

At one point or another, most educators find themselves in a school improvement effort that gets “stuck.” Frustratingly, this often happens after some initial success—and then, improvements reach a plateau or even slide backwards. In an article in the June online edition of Educational Leadership, McREL’s Bryan Goodwin looks at why this happens and what schools can do to get back on track.

The problem, Goodwin asserts, is that schools often latch on to a solution that works in the short term without understanding why it’s working. When efforts start to stall, they are then unable to adjust. For example, a school may adopt a new curriculum that leads to quick improvements in student achievement. But, a few years later, achievement stops improving and, unsure why, the school may either double down on implementation or drop it altogether and replace it with something else. 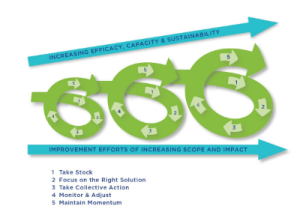 High-performing schools, he explains, aren’t wedded to specific programs and, instead, adapt what they have to align with student needs. They know, for example, that their initial success was not just because of the program but because they had made their curriculum consistent and aligned.

Making long-term, meaningful changes require what Goodwin calls an “inside-out approach” to school improvement. The elements of this approach include a deep understanding of the problem, rapid-cycle improvement (studying a solution, improving it, studying the improved solution, etc.), and peer observation and coaching.

You can read the entire article here.