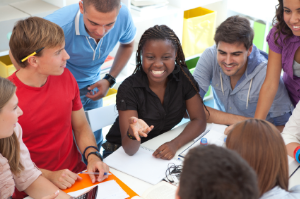 In 1989, I became the principal of a technology magnet school. Nine years later, I was named an Apple Distinguished Educator. As the lead author of Using Technology with Classroom Instruction that Works, 2nd Ed. (2012), I remain an active proponent of technology-infused learning. Technology enables learners to do or create things that might not otherwise be possible. Knowing all of this, you might ask why I, of all people, would ever advise educators to restrict technology in the classroom.

In one of the episodes* of CBS’s The Big Bang Theory, Leonard reminds his roommate and fellow scientist, Sheldon, of a situation in which Sheldon learned to swim—on the floor—using the Internet. Sheldon defensively asserts, “The skills are transferable. I just have no interest in going in the water.” Clearly, there are times in the learning process when students learn best by actually “going in the water.” Take driver’s education, for example.

Do you remember the learning sequence in your experience? You likely started in the classroom, learning the declarative knowledge necessary to drive a car, such as the rules of the road, standard traffic laws, and other basics. You might have also spent time in a simulator, practicing evasive maneuvers that would be dangerous for a novice to attempt on the road. Still, you and your teacher clearly understood that the textbook and the simulator were no replacement for actually sitting behind the wheel. An app would not have cut it; simulated experiences wouldn’t be an adequate substitute for gaining real, experiential knowledge.

In math classrooms, many teachers are now augmenting—and sometimes replacing—direct instruction with apps or video instruction provided by third-party sources, such as Khan Academy. While these apps and websites do offer a way for many learners to reinforce their understanding of basic skills and processes, many elements of student discourse and reflection are lacking.

Recently, when I visited a middle school algebra class, I watched as students worked independently on their laptops, completing Khan Academy lessons related to the day’s learning objectives. Following that 10-minute exercise, students closed their laptops and were grouped into triads based on where they were in the Khan Academy progression. Each triad worked on a small number of algebra problems, discussing different ways to solve the problems. Some worked on interactive white boards while others worked on paper. They engaged in deep thinking and true problem solving, opening up a dialogue about math. Students helped each other, challenged each other’s thinking, and, ultimately, learned from each other.

At the end of the class, I asked a few students what they liked about the way the teacher structured the lesson. Yes, they liked being able to work at their own pace online, but every one of the students I talked to expressed that what they really liked about the class was the time they spent talking to each other about the learning. Uniformly, students agreed the conversations were the best part of the learning experience; the feedback they received from others deepened their understanding of the concepts.

Could the teacher have accomplished a similar objective by putting students in a variety of TodaysMeet rooms or Google hangouts and have them share their thinking in that way? Maybe. But the real question is, Why do that? Good educators plan their instruction intentionally. They think about what they want their students to understand and master, and then adapt their strategies to accomplish that goal.

The real art in teaching lies in knowing when and how to use technology to enhance learning. Sometimes, it’s better to use a textbook or a whiteboard. Other times, engaging students in online simulations and computer-assisted learning will be appropriate strategies. And, sometimes, it is best to just unplug and engage with other humans, face-to face, in real time.