Most of the commentary following the release of national NAEP scores last week focused on flat performance among the nation’s 4th grade students. Of course, reading past the byline yields more interesting fodder for discussion.

In the case of English Language Learners, NAEP captures national variation in achievement that’s difficult to ignore – and explain. Using NAEP data and published ETS ELL statistics, I pulled together a couple of graphs comparing 4th grade ELL performance among those states with the nation’s largest ELL populations (Arizona, California, Florida, Illinois, New York, and Texas) and those states with the nation’s fastest growing ELL populations (Alabama, Indiana, Kentucky, Nebraska, North and South Carolina, and Tennessee). Among the latter states, rates of ELL population growth between 1994 and 2005 ranged from just over 300 percent (Nebraska) to just shy of 715 percent (South Carolina). 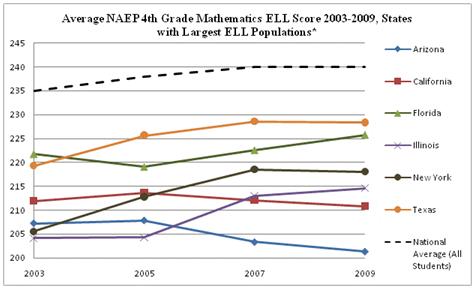 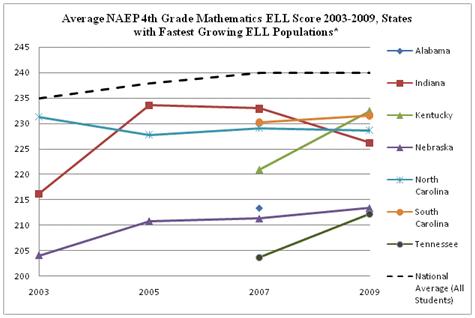 While you might expect both groups to demonstrate relatively similar patterns of achievement over time, NAEP outcomes suggest otherwise. Clearly, this is more than a demographic story: several states with fast-growing ELL populations seem to be doing fairly well (North and South Carolina, Kentucky) in comparison to more heavily populated states that are lagging behind the national leaders (Arizona, California, Illinois, New York). And internal variation within each group? All over the board. Critics have pointed out that NAEP is sensitive to differences in curricula and standards in addition to more controversial policies (namely, distribution of instructional resources and social promotion).  Obviously, graphs are just a starting point, but it’s worth pointing out that an honest NAEP discussion should serve as a starting point for uncomfortable questions about educational equity.